BUSINESS NEWS-Women paid £260,000 less than men over their careers – report

Women are paid just £380,000 on average over their lifetimes compared with £643,000 for men, according to official figures that lay bare the scale of Britain’s gender pay gap.

The figures in the Office for National Statistics’ Human Capital Estimates report revealed huge inequality between men and women even at the highest levels of educational attainment. It said women with a master’s or PhD degree still made one-third less over their lifetimes than men with the same qualifications.

The findings are contained in an ambitious attempt by the ONS to assess Britain’s entire “human capital” in financial terms. It said that even after adjusting for hours worked, women were paid about a fifth less than men over their lifetimes. “Taking account the effect of weekly hours worked for men and women, women’s human capital is 22.7% lower than men’s,” it found.

Men and women tend to have the same pay in their late teens and early 20s, but after that their incomes diverge markedly. When the ONS looked at those aged 16 to 65 whose highest educational level was A-levels or equivalent, the gap peaked at the age of 48. At this point, the average male is paid £16,600 more than the average female. 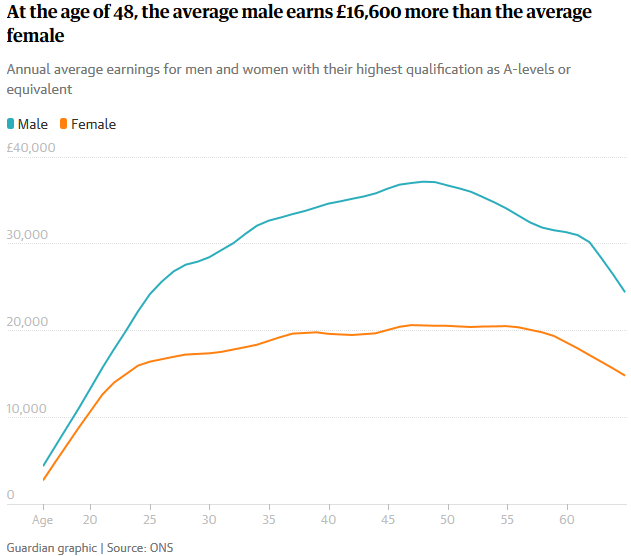 The ONS said the figures reflected differences in working patterns, with women’s lifetime earnings lower as many more worked part-time. In separate analysis this year, the ONS said the gender pay gap for 18- to 39-year-olds who worked full time had fallen to “close to zero”.

The ONS said gender pay gap figures did not show differences in rates of pay for comparable jobs, as they were affected by factors such as the proportion of men and women working part-time or in different occupations. “For example, a higher proportion of women work in occupations such as administration and caring, which tend to offer lower salaries,” it said.

The figures come as one of the BBC’s most prominent female presenters, Samira Ahmed, is taking the broadcaster to an employment tribunal over claims she was paid less than male colleagues for doing equivalent work, in a landmark case against the corporation.

Gemma Rosenblatt of the Fawcett Society, one of the most vigorous campaign groups on the gender pay gap, said: “The cumulative impact of the gender pay gap leaves women with a significantly lower lifetime income and pension pot than men – this simply isn’t fair.

“More needs to be done to tackle the gender pay gap and its causes. Gender pay gap reporting is helpful but it needs to go further. It’s time for action not excuses. Government needs to require employers to publish action plans setting out how they will close their gender pays and monitor progress. There should be meaningful sanctions in place for those who do not comply.”

The lower lifetime earnings of women translate into lower pensions. Separate research by the financial advisers Salisbury House Wealth found that women in the UK last year received less than half the investment income received by men.

It found that women received an average of £12 a week from investment income in 2017-18, compared with £28 for men. It said the total occupational pensions income for a man was £111 a week compared with £71 for a woman.